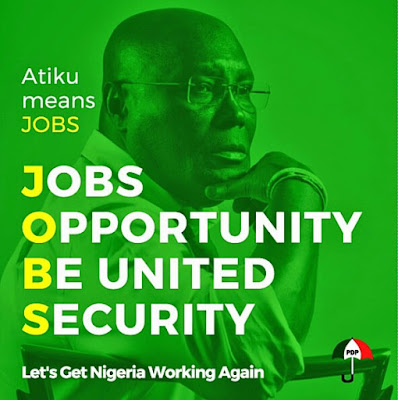 Advert agencies in Nigeria are turning down offers from Atiku Abubakar, presidential candidate of the Peoples Democratic Party (PDP), for fear of backlash from President Muhammadu Buhari’s government.

Although the official window of the Independent National Electoral Commission (INEC) for commencement of political adverts is November 18, politicians have been staying ahead of the game by using third parties, such as pressure and support groups, to place adverts at strategic points in their cities.

Babajide Sanwo-Olu, the governorship candidate of the All Progressives Congress (APC), has been doing a lot of this, for instance, SR reports.

However, speaking with SaharaReporters, an ad agency executive in Lagos said the fear of the government of the day is preventing them from accepting promotional materials from Atiku.

“The Atiku campaign is in soup,” said the executive, who asked not to be named.

“The problem is that every advert agency the Atiku team has approached, the ones that I am aware of, they turned down the offer because of the fear that the government would move against them. I turned them down myself, both cash and cheque offers to have Atiku featured on billboards in Lagos.”

SaharaReporters understands that at least 12 advert agencies — five in Abuja and seven in Lagos — have rejected ad requests by Atiku’s campaign team.

“In Abuja, I’m sure five of my colleagues turned them down just as I did,” the source continued.

“Some of us are waiting to get Buhari adverts. It’s not like Buhari’s campaign team will pay us more than Atiku’s is offering; it’s just that it’s safer for us than what the Atiku guys are offering.”