The national chairman of the All Progressives Congress (APC), Adams Oshiomhole has debunked reports of making any comments against the wife of the president, Aisha Buhari.

There were stories claiming Oshiomole said she had an affair.

His spokesperson, Simon Ebegbulem, made the clarification after a rumour emerged on social media.

A post which made the rounds online had alleged that Oshiomhole accused Mrs Buhari of being in an amorous relationship with a certain senator of the Peoples Democratic Party (PDP).

The fake news post had read: “It is unfortunate that our First Lady Aisha Buhari has allowed her amorous relationship with a certain PDP senator to becloud her sense of responsibility. We will make sure she returns to Adamawa while Buhari remains in the presidential villa.”

In the swift reaction, Simon described the post as malicious and misleading, saying it is the handiwork of mischief makers and the PDP.

He said: “At no fora did the National Chairman make such uncomplimentary remarks against the person of the First Lady.

“This is part of the fake news from the pit of hell being propagated by highly unscrupulous elements of the PDP and their cohorts, knowing fully well that they have lost the forthcoming general elections.” 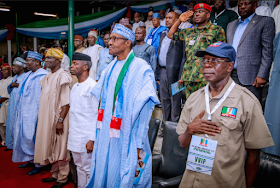 The APC chairman’s spokesperson, therefore, urged that the public disregard this misleading comment on the social media.
Warning: count(): Parameter must be an array or an object that implements Countable in /home/headlin1/public_html/wp-content/plugins/ultimate-author-box/inc/frontend/uap-shortcode.php on line 94
style=”display:none;”>