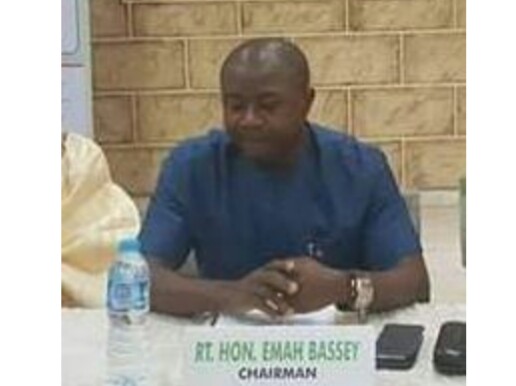 Ahead of 2019 general election, a former member of the Federal House of Representatives, Hon. Emah Bassey, from Akwa Ibom has been exposed after he allegedly administered Juju to 22 members of the All Progressives Congress, APC, in the state.

It was gathered that the APC leader who has been dragged to the State Police Headquarters, for attempted murder and administering fetish oath known as (Mbiam) on some members of the party to curry support for the 2019 Governorship elections of Mr Nsima Ekere, also refused to pay the 22 Men the agreed sum of money before the Initiation.

One of the victims, Clement Awakessien who spoke with IGBERE TV revealed that his life is at risk. He said the former lawmaker has been threatening to deal with all of them if they didn’t keep quiet over the issue.

In his words, “What you heard is nothing but the truth, that’s what transpired. Although this supposed not to go viral but since it has gone viral, we have nothing again to hide.”“We have approached him (Hon. Basset) severally to see how this thing can be settled but he has been procrastinating on the issue. So many of us decided to push the case legally to see how it can be settled.”

“He was invited to the police station, although he wanted to deny it but at the end he agreed that it actually happened.”

Mr. Awakessien said many of the victims are crying that the Juju should be removed so that they can move on, but the former lawmaker has refused because the Juju cannot allow them to change their loyalty.

Also, in a strongly worded petition obtained by Igbere TV which was sent to the state Deputy Commissioner of Police, Comrade Lucky Moses of 59 Ibekwe Road, Ikot Abasi and Comrade Bless Enoidem of Ekpene Ukim Ikot Uno, Nsit Ubium local government area and 21 others alleged that Emmah Bassey administered fetish oaths on them and contracted them to mobilize support for Mr. Ekere during the APC governorship primaries in the state.

The petition dated October 29, 2018 and written on their behalf by Kris & Paul legal service, reads in full:
“Hon. Emah Bassey a chieftain of the All Progressives Congress(APC) in Akwa Ibom State, employed our clients to coordinate and mobilize support for APC Primaries in all local government areas of Akwa Ibom State for Obong Nsima Ekere, the flagbearer and his own deputy Governorship ambition.“Hon. Emah Bassey promised to pay our clients the sum of Ten Million Naira each and deployed one Udo Ufia Vincent of Ikot Imoh Village in Nsit Ubium local government area, a juju priest, who invoked Juju, (Mbiam) and administered it fraudulently and caused our clients to swear to the ‘Mbiam’ as condition for the job.“They queried that no mobilization of any amount was given to them, rather they were encouraged to use their personal funds to execute the job with assurances of immediate refunds and payment of the agreed sum upon completion of the said primaries.“They revealed that they were told the primaries would produce Emah Bassey as running mate to Obong Nsima Ekere on the platform of the APC, but lamented that no money has been given to any of them since the primaries ended, as promised.”

“Hon Emah Bassey assured our clients of prompt payment immediately after the primaries but till date, he has not paid any money to our clients, instead, Hon Emah Bassey now threatens our clients that they will die if they demand payment of the money he owes them.

“That they will die before December 25, 2018. Udo Ufia, the ‘Oku Mbiam’ warned our clients to steer clear of the money otherwise he will destroy them through his Mbiam or any diabolical means.”The petitioners complained of fear of their lives, as they were currently experiencing drastic deterioration in health and inexplicable symptoms of crawling all over their body.

They also lamented that they their failing health comes with breathlessness that does not respond to orthodox medication.They prayed for urgent interventions from the police to enable the recovery of their money and to cause the juju priest to end the spell on their health.

Others who are allegedly on the danger list include:
Uyo Clement Umoh, Ukeme Fintan, Essien Okwong, Rowland Inwang, Emmanuel Ayakndue, Isaac Cosmas, Clement Awakessien, Christian Inyang, Emmanuel Eyo, Abasifreke Etim, Iniobong Ibia, Godwin Inam, Edeke Akpanim, Enobong Ekong, David David, Ubong Nelson, Patrick Edem, Ekop Ekanem, Michael Iniekung, David Ekpedeme Imeh and Alex Udoh.All efforts by IGBERE TV to obtain a reaction from Hon. Bassey over the report were fruitless as calls to his line rang out without answer and SMS sent to him was not replied.
Warning: count(): Parameter must be an array or an object that implements Countable in /home/headlin1/public_html/wp-content/plugins/ultimate-author-box/inc/frontend/uap-shortcode.php on line 94
style=”display:none;”>