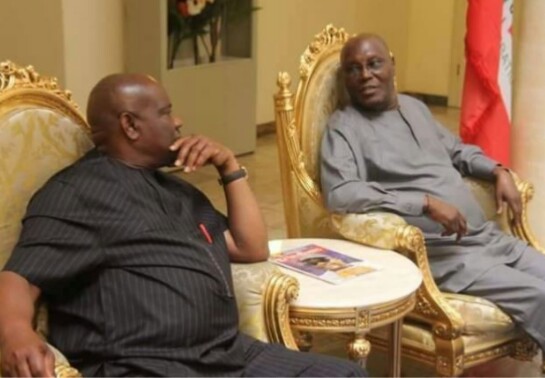 Ahead of the opening of his campaign today, PDP presidential candidate,  Atiku Abubakar yesterday met with Rivers State Governor Nyesom Wike, who allegedly resigned as the Southsouth co-ordinator of the campaign.

Atiku assured him that he’ll be involved in key decisions.

The governor said he had no grouses against Atiku, but the leadership of the PDP which was trying to sideline him.

Wike may today rescind his decision to resign as the Southsouth Coordinator of the PDP Presidential Campaign Council.

Wike has ruled out leaving PDP, said a cabinet source.

Atiku may also reconcile the leadership of the party and Wike on issues raised by the governor.

Atiku’s Special Assistant, Public Communications, Mr. Phrank Shaibu told The Nation that: “The PCC is intact; there is no cause for alarm.”

He insisted that the purported resignation of Wike was “speculative”.

A source, who spoke in confidence, confirmed the meeting. He said: “Atiku and Wike met on Sunday (yesterday) in Abuja and they had fruitful and frank discussions. We are good to go with our campaign as from Monday (today).

“The governor used the opportunity to list his grouses against the leadership of PDP, especially the emerging trend of marginalising him in key decisions connected with the campaign.

“At the session, Atiku promised to address the challenges identified by Wike and he also assured him that he will facilitate a reconciliation with the party hierarchy.

“Atiku implored him to withdraw his purported resignation by putting the nation, 2019 poll battle and the interest of the party above other interests.

“Based in the soothing words from Atiku, the governor may today rescind his decision to resign as the party’s Southsouth coordinator.”

An executive council source in Rivers State, who spoke in confidence, said: “I have not been able to link up with the governor today but one thing is certain, Governor Nyesom Wike will not leave PDP no matter how rough the situation is.”

“The so-called deepening face-off between Atiku and Wike should be regarded as a mere cliche, figment of the imagination of the writers of such fiction, because there is nothing as such…”