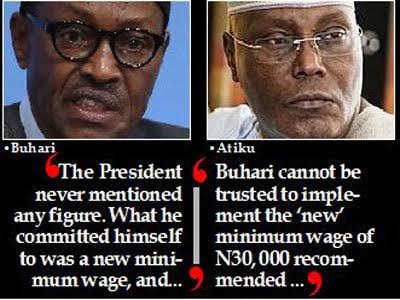 The proposed N30,000 minimum wage for Nigerian seems to have become a campaign issue ahead of next year’s general election, between the leading parties.

To the Presidency, the controversy over President Muhammadu Buhari’s position on what the least paid worker should earn is “concocted”.

On his part, Atiku Abubakar said Buhari is playing tricks.

The Presidency accused some political actors, including the Atiku Media Office, of trying to score cheap political goals, warning that “stiff judgment awaits them at the polls”.Presidential spokesman Femi Adesina was reacting to comments by the Atiku Media Office, which said “President Buhari cannot be trusted to implement the ‘new’ minimum wage of N30, 000’’ recommended by the Pepple tripartite committee”.Adesina said: “Those who have latched onto the concocted controversy to play cheap politics, we appeal to them to remember that elections are not won through loquaciousness, and trying to demean the President at every drop of a hat.“But then, it is not surprising, as they have nothing else to sell to Nigerians, if they don’t ride on the name of the President. Stiff judgment awaits them at the polls.’’

He noted that these reports were contrary to what transpired on Tuesday when the committee presented its report to the President.

Adesina said the President, while acknowledging the concerns raised by government on affordability and labour’s focus on meaningful increase, stated clearly in a speech, which was made available to the media, that:

“In a way, both arguments are valid. I want to assure you all that we will immediately put in place the necessary machinery that will close out these open areas.

“Our plan is to transmit an Executive Bill to the National Assembly for passage within the shortest possible time. I am fully committed to having a new National Minimum Wage Act in the very near future.

“As the Executive Arm commences its review of your submission, we will continue to engage you all in closing any open areas presented in this report. I, therefore, would like to ask for your patience and understanding in the coming weeks.”

Adesina observed: “From the above, and throughout the report-submission ceremony, the President never mentioned any figure. What he committed himself to was a new minimum wage, and only after the Report of the committee has been reviewed by the executive and legislative processes of government and an appropriate bill presented to him for assent.

“Until the proposed minimum wage has gone through the whole gamut of law-making, President Buhari, who is a stickler for due process, will not be caught in this unnecessary web of controversy, which amounts to putting the cart before the horse and hair-splitting.’’

Atiku, the presidential candidate of the PDP, said: “Buhari may not have the political will to implement the new wage’’.

Also, an Atiku group insisted yesterday that an Atiku Abubakat presidency would usher in a new beginning for growth.

The New Nation with Atiku (NNA) noted that under the present circumstance, the former Vice President stood out as the best chance to take the country to the Promise Land.

Briefing reporters in Abuja, the group’s Director General, Adesina Abolade and National Coordinator, Blessing Braide, said they were prepared to canvass for votes for Atiku once the ban on political campaign is lifted.

Braide criticised the poor economy under Buhari’s leadership, saying that is where Atiku comes in.

“He is coming to write his name in gold and to touch lives. What he and his predecessor Olusegun Obasanjo were not able to do, he has seen all the lapses and he is the only person among those contesting that has a blueprint and fully ready.

“So we have to rally round to support him as he has what it takes. We are ready to mobilise the youth and the old in all parts of the country to vote for the man that is fit for the job,” he said.

He also stressed that the group is not a apolitical and does not belong to any political party, “But we are close to what is happening and that is why we have come together to say that we will support the vision of Atiku …”

“If Atiku is looking for power and somebody who is not looking for power might not know how to mange power if you give him power. But this man says that I know how to do it. He has establishment in this country that has employed our youth and if all the wealthy men have done the same, lots of our children would have been employed.”

Also yesterday, a firm owned by Atiku said it had approved N33,000 as minimum wage for its employees.