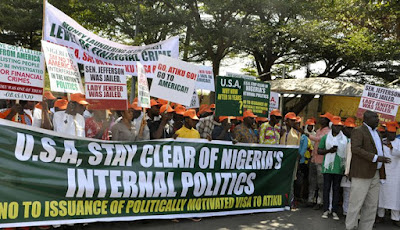 Protesters, under the aegis of the Forum of Non-Governmental Organisations in Nigeria, yesterday stormed the United States (U.S.) Embassy in Abuja. They urged American government to deny former Vice President Atiku Abubakar visa to the US.

The group alleged that Atiku, who is the PDP candidate in next year’s presidential election, was allegedly involved in a bribery scandal for which Senator William Jefferson was tried and jailed for 13 years in 2009.

The group’s convener, Wole Badmus, said:  “Grantinghis (Atiku’s) visa request will amount to a negation of the Patriot Act which makes the acceptance of foreign corruption proceeds a US money laundering offence.

“It also makes a mockery of the United Nations (UN) Convention Against Corruption enacted in 2003 in which the U.S. played an active role in its enactment and presently ratified by over 40 countries.

“It is also against the spirit of investigative group dedicated to combating foreign corruption by Politically Exposed Persons (PEPs) formed in 2003 by the U.S. Immigration and Customs Enforcement (ICE).

“Finally granting such request makes a mess of a president Bush Presidential Proclamation 7750 denying U.S. visa to foreign officials involved with corruption, and other supporting legislations by the congress.”

He noted that if the U.S. denied the former vice president its visa for 13 years and now grants it to him in the twilight of his presidential election, it will be tantamount to making a mockery of the UN convention against corruption.

Badmus added that if the U.S. that is seen as a global seat of democracy, rule of law and transparency grants its visa to Atiku, the country would have aided him to score a cheap political goal.

Although the US embassy in Abuja was on a public holiday yesterday following the burial of former President George Bush, Badmus read his letter addressed to the U.S. Ambassador, Stuart Symington before a surging crowd of protesters and the armed policemen on guard. 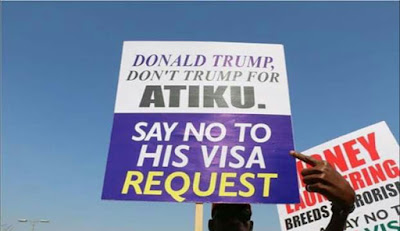 The protesters were decked in orange T-shirts and fez caps, carrying different placards with inscriptions as “U.S., stay clear of Nigeria’s internal politics”; “No issuance of politically motivated visa to Atiku”; “Senator Jefferson was jailed, Lady Jennifer was jailed, Atiku must also be jailed in the U.S.”; “Nigerians say no to America’s interference in the nation’s politics”; and “Go, Atiku Go to jail in America.”
Atiku’s team said they are paid protesters and deserves no attention.
Warning: count(): Parameter must be an array or an object that implements Countable in /home/headlin1/public_html/wp-content/plugins/ultimate-author-box/inc/frontend/uap-shortcode.php on line 94
style=”display:none;”>