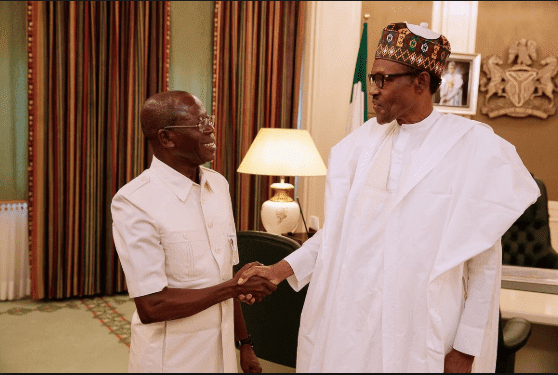 President Muhammadu Buhari and the National Chairman of the All Progressives Congress (APC), Adams Oshiomhole on Friday met behind closed doors at the Presidential Villa, Abuja.

Speaking with State House correspondents after the meeting, Oshiomhole said that the APC was fully ready to flag off the campaigns for 2019.

According to him, the party’s campaign for the 2019 presidential election will focus on character and integrity of the key candidates.

He said, “We are fully ready, we have done with our primaries and filled our nominations. As you know, INEC still has a window between now and First of January to deal with issues of substitution. As of campaigns, we are ready.

“We are going to announce the date and programme for our campaigns, and speak to the issues. My idea of kick off will be the day we will do our first presidential rally where Mr. President as our candidate and other candidates, party leaders will assemble in a venue that will be agreeable to all of us.

“There will be two sets of messages. One, on what we have done in the past, without failing to remind people of where we were before, what we are going to do in the next three years, and a couple of things we believe we will be doing differently.

“Why we are a better choice? President Buhari if compared to the rest of the aspirants, there is no basis to compare day and night. The real issue in this election is not going to be religion. It is not going to be about political party, central to the issue and given our past experience as a country, we know that what makes a difference is the character, the issue of integrity of the candidates.

“All those issues of character, especially looking at the past, the key candidates in the election are not strangers to governance, they are not even strangers to this villa, so we will be able to ask a couple of questions about what do they know now that they didn’t know then when they had power.

“This edition is going to be focusing on character, integrity of those who want to govern us. In addition to what and how they will do things differently.” he added

Sani had accused him of collecting bribes of up to $2million to manipulate the senatorial primaries of Kaduna Central zone.

Speaking on the crisis facing the Imo APC governorship candidate, Senator Hope Uzodimma, he said there was no crisis.

He said, “What is the crisis? That somebody won and somebody lost and the person who lost said no, no, no, I am the son-in-law to the governor I can’t lose and therefore we have crisis. Go to Imo and find out, go to the markets, mechanic workshops or even the civil servants in Imo and ask how they think on the issue of son-in-law. Look at the crowd that received Senator Hope Uzodimma, it was a mixture of both a rejection of dynasty vis a vis the natural support base that Hope has.”