President Muhammadu Buhari on Thursday May 13 2021 called on Israel and Palestine leaders to respect human rights stressing that his administration is paying keen attention to the conflicts ongoing.

Buhari issued a statement through the Minister of foreign affairs on Thursday, urging the duo to cease all hostile attacks and resolve for a two-state solution

Palestine and Israel have witnessed series of violent attacks  which began last week.

The people of Gaza launched airstrikes into occupied areas of East Jerusalem according to reports leading to the death of about 80 persons. Isreal on the other hand is reported to have recorded the death of 10 persons

While militants from Hamas continue to launch rockets into civilian-populated areas in Israel, Israeli forces are reported have also  neutralised a top  commander of the Hamas militants.

The Prime Minister of Israel Benjamin Netanyahu has promised he will ensure all Israelis caught up in the ongoing conflict are kept safe. 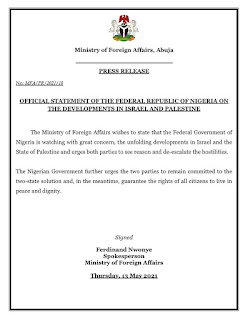 “ The Federal Government further urges the two parties to remain committed to the two-state solution and, in the meantime, guarantee the rights of all citizens to live in peace and dignity. ”