CNN filed a lawsuit against U.S President Donald Trump and several of his aides Tuesday morning in DC District Court.

The White House had suspended Acosta’s press pass last week after he asked Trump multiple questions at a post-midterms news conference. Trump, at the conference, called Acosta a “rude, terrible person” who shouldn’t be working for CNN.

CNN and Acosta are the two plaintiffs in the suit, while Trump, chief of staff John Kelly, press secretary Sarah Sanders, deputy chief of staff for communications Bill Shine, Secret Service director Joseph Clancy, and the Secret Service officer (identified as John Doe, pending his identification) who took Acosta’s pass away, are the defendants.

CNN’s statement on the suit read:

CNN filed a lawsuit against the Trump Administration this morning in DC District Court. It demands the return of the White House credentials of CNN’s Chief White House correspondent, Jim Acosta. The wrongful revocation of these credentials violates CNN and Acosta’s First Amendment rights of freedom of the press, and their Fifth Amendment rights to due process. We have asked this court for an immediate restraining order requiring the pass be returned to Jim, and will seek permanent relief as part of this process. While the suit is specific to CNN and Acosta, this could have happened to anyone. If left unchallenged, the actions of the White House would create a dangerous chilling effect for any journalist who covers our elected officials. 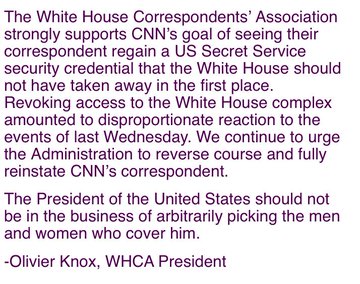 541 people are talking about this