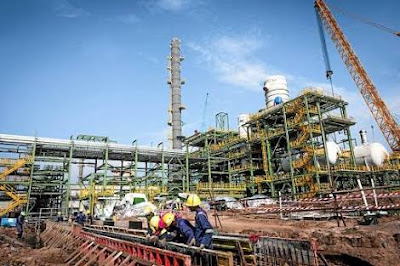 The President, Dangote Industries Limited, Aliko Dangote, has disclosed that the raining season this year caused devastating damage on his refinery project site.

Dangote said the oil refinery, designed to process 650,000 barrels a day of crude, should start producing fuel in the first quarter of 2020 and be at full capacity within six months of that.

In an interview with Bloomberg TV, he said, “We will finish the mechanical [part] by the end of 2019 if hopefully, we don’t have the same rain because of the raining season this year… Climate change is real. We have had devastating damage to what we are doing at the site. But anyway, we have recovered a bit, and we are pushing.

“It is a huge refinery; it is the largest single line refinery in the world. We will start production by the end of the first quarter of 2020. We will ramp up very quickly; it is a high-tech refinery.”

Dangote said in August that he had arranged more than $4.5bn in debt financing for the refinery project.

He was quoted by Reuters as saying that lenders would commit about $3.15bn, with the World Bank’s private sector arm providing $150m, adding that he was investing more than 60 per cent from his own cash flow.