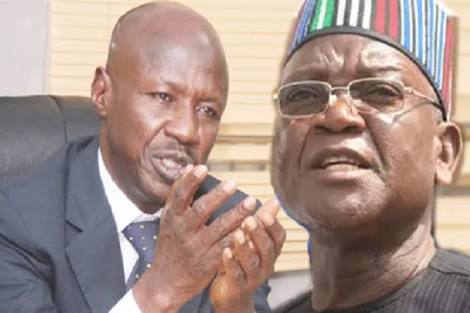 Benue State Governor Samuel Ortom has alleged that the Economic and Financial Crimes Commission (EFCC) had become a department in the rulling All Progressives Congress (APC).

The governor also accused the anti-corruption body of being openly biased in its fight against corruption.

He spoke at the swearing-in ceremony for nine new commissioners who replaced those sacked in August.

Ortom said he would not succumb to any intimidation by the EFCC. He said: “Despite intimidation from the EFCC that has become a department in APC, we are not going to be intimidated. In the past few months, civil servants working with me are being troubled for no just cause. Once you decamp from APC, EFCC comes after you. Fighting corruption should not be selective.”

He said the EFCC had been on the heels of members of a committee for the burial of the late Tor Tiv because of money released for “the burial and settling of the deceased family.”

The governor said: “if we do anything wrong we are ready to face the law. But we will not succumb to intimidation.”

He also said that his administration could now pay workers’ salaries as and when due because he had detached himself from godfatherism.

Ortom said since he left the APC for the PDP, he had fared well in salary payment as he was no longer under undue “pressure” to satisfy the caprices of certain ‘men’.

“There is no godfatherism again in Benue under my watch. That is why you can see that since I detached myself from godfather, even salary I have been able to pay as at when due. I’m seeking for other ways in offsetting the remaining arrears of salaries.

“Since I left APC, I have been paying salaries. In APC, godfathers will not allow me but now I’m a free man.”