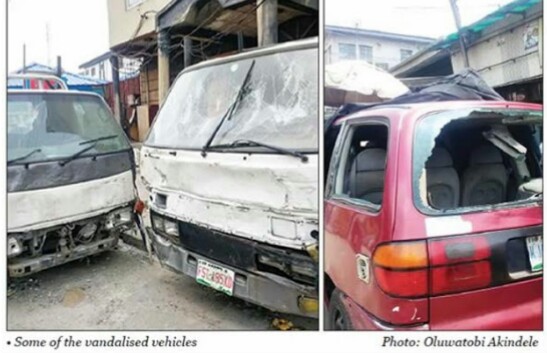 There was unrest in the early hours of Sunday in the Oyingbo area of Lagos State as hoodlums engaged in a free-for-all. They also vandalised vehicles and robbed traders.

It was gathered that the hoodlums, who reportedly numbered more than 25, were fighting for territorial supremacy on the streets of Oyingbo.

It was gathered that some of the vehicles vandalised by the hoodlums included interstate buses used in transporting farm produce to the Oyingbo Market.

One of the market women, Alhaja Moji Kadara, while counting the losses incurred as a result the fight, said the extent of damage was unprecedented.

She said, “It has been about six months now that they (hoodlums) started fighting; they would come into the community and destroy things.

“On Sunday morning, before I arrived at the shop, I was told not to come early because the boys were at it again. By the time I got there, I saw that they had already destroyed numerous vehicles, including three of the buses that bring in agricultural produce for us from Ile-Ife, Osun State.

“The drivers had to run for their lives when they sighted the hoodlums. The hoodlums stole the battery of one of the buses, broke the windscreens of two others and stole the vehicles’ particulars. They also stole the drivers’ phones and money. I have never witnessed such vandalism before.”

The leader of fruit sellers in the market, Alhaja Fausat Shogbamu, said the fight broke out around 1am and lasted till about 4am.

“I live in the community. The hoodlums broke into six shops and stole every valuable items and money they could lay their hands on. Those selling vegetables were also robbed of their money. They vandalised every vehicle parked on Coates Street, Oyingbo Road and Borno Way; in total, 18 vehicles were destroyed,” she added.

However, when The Punch visited the area on Monday, seven of the badly damaged vehicles were still parked on the streets, while the others were said to have been evacuated by the owners.

A community leader, Lateef Lasisi, called on the government to make a police patrol team available in the area to put the hoodlums in check.

He said, “The traders in this community are into the sale of agricultural produce. The little they get as proceeds are what they use for training their children through school. Imagine some miscreants breaking into their shops and stealing their money. What we ask from the government is that a police patrol team should be provided for the area any time from 8pm.

“Those bringing the goods from the farms didn’t know what was happening in Lagos, only for them to have their vehicles vandalised on getting to Lagos. It is not fair at all.”

The Baale of Oyingbo, Chief Adegboyega Junaid, said the boys were only using the fight as an alibi to steal.

Junaid stated, “The boys perpetrating these acts are between the ages of 14 and 16. It is when they want to steal that they claim to fight each other and in the process, they vandalise cars, snatch phones from people, break into shops and even injure some people.

“All that were destroyed were valued at about N5m. We have lodged our complaint with the Denton Police Station and we are making attempts to find a permanent solution to the menace.”

The state Police Public Relations Officer, CSP Chike Oti, said some of the boys had been rounded up, adding that investigation was still ongoing to arrest those who were at large.

Oti said, “We received a distress call that a group of boys were engaged in a free-for-all in the Oyingbo/Ebute Meta area of Lagos. A quick intervention team from the Denton Police Station was deployed in the location and brought the situation under control before it escalated. Fifteen hoodlums were arrested.

“One of the boys has made a confessional statement, claiming that he and the others engaged in a territorial battle for supremacy. He took us to where they kept their weapons and we have been able to recover eight machetes and two daggers. Investigation is still ongoing and as soon as it is completed, they will be charged to court.”