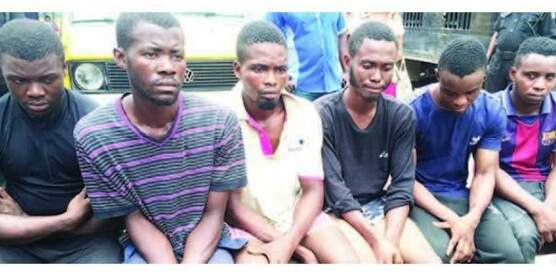 The supervisor of Skeptar Petrol Station, Daniel Freedom and a fuel attendant, Mike Charles have been arrested by operatives of the Lagos State Police Command for allegedly robbing the petrol filling station where they both work in the Igbo-Elerin area of Ojo Local Government, Lagos.

Also arrested were their accomplices, Obinna Ofoma, 25; Ndukwa Junior, 22; William Okon, 22; and Tony Oluchukwu, 28, for alleged involvement in the robbery.

The state Commissioner of Police, Edgal Imohimi, while briefing the press on Monday, said operatives of the command were mobilised to the scene, adding that the suspects were arrested at their hideouts.

Imohimi said, “On October 28, 2018, around 9pm, information was received from a credible source that some armed men were sighted at Skepter Petrol Station situated at Igbo-Elerin Bus Stop, Ojo area of Lagos, and were robbing the fuel attendants and their customers.

“On receipt of the information, operatives from the Ilemba Hausa Police Station and FSARS Ikeja jointly mobilised to the scene. Unfortunately, before the team could arrive, the hoodlums, who sensed danger, had disappeared. However, later in the night, the robbers were arrested from where they were hiding and their arms, comprising two toy guns, three knives and one axe, were recovered.

“During interrogation, they gave their names as Obinna Ofoma, 25; Ndukwa Junior, 22; William Okon, 22; Tony Oluchukwu, 28; Charles Mike, 20; and Freedom Daniel, 20. It was revealed that the supervisor of the petrol station, one Daniel Freedom, and his fuel attendant, Mike Charles, were the masterminds of the robbery operation at the filling station.”

Imohimi, who said the suspects had confessed that they specialised in robbing petrol stations around Igando and Ilemba Hausa axis of Lagos, added that investigation was ongoing with a view to arresting other members of the gang currently at large for prosecution.