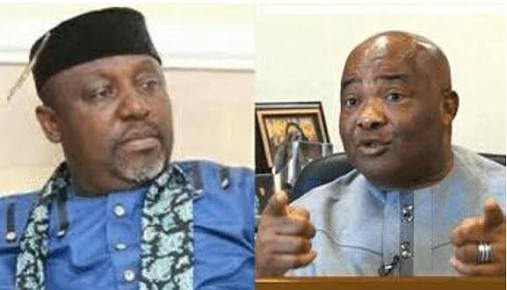 The fight for the soul of Imo state has continued as APC Governorship candidate, Senator Hope Uzodinma has dared the incumbent governor, Rochas Okorocha.

Uzodinma who has the backing of APC chairman, Adams Oshiomole, said Governor Okorocha has underestimated how unpopular he has become in the state.

He stated this in reaction to Okorocha’s claims that APC will lose the state and five million votes in the South East for denying his son-in-law, Uche Nwosu, the governorship ticket of the party in the 2019 election.

In a statement, by Declan Emelumba, his Director of Media and Special Duties, Mr Uzodinma said the only reason APC would win in the state is his being the governorship candidate of the party.

According to him, governor Okorocha’s membership of the party was, indeed, a minus.

He said: “Okorocha has run for many elections including the governorship of Imo State, before 2011, and even the presidency, and lost all. But, in 2011, in particular, Imo people voted more against former governor Ikedi Ohakim than for Okorocha, so, he merely benefitted from the anger of the people against Ohakim.

“Even at that, the election went into a bi-election, where Ohakim was finally manipulated out of the race and Okorocha became governor. Also, in 2015, Okorocha, as incumbent governor, could not win outright on first ballot.

“The election was concluded on a second ballot, where some aggrieved PDP members helped, again, to manipulate him into the governorship.”

“I think this is more than enough evidence that in terms of popularity, Senator Uzodinma is far more popular than Okorocha in Imo West (the biggest senatorial district in Nigeria) where both come from.

“The truth of the matter is that all strata of Imo society are celebrating Uzodinma’s victory as the APC governorship candidate and this has brought them back on track to vote massively for APC in 2019.

“Uzodinma’s popularity in Imo State is infectious and it will not only guarantee victory for APC, but will rake in far more than five million votes for the APC from the South East in 2019. So, let no one be deceived by Okorocha’s boast because he is the problem of APC in Imo State and the South East.”