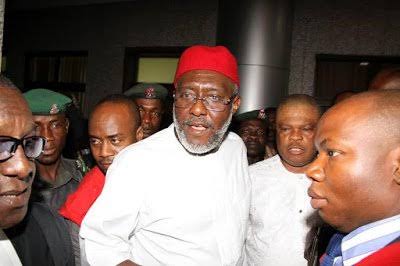 A former National Publicity of the PDP, Olisa Metuh, told the Federal High Court in Abuja on Tuesday that the Economic and Financial Crimes Commission had on Monday frozen all his bank accounts.

Metuh, who expressed shock over the development, said he learnt of the no-debit order placed on his account after his failed transaction on one of the accounts on Tuesday.

He told the court presided over by Justice Okon Abang that as a result of the development, he could no longer feed his family or buy things as common as water and pain-relieving medicine like Panadol.

Metuh was testifying in his trial as a defence witness when he digressed into making the comments about his frozen accounts on Tuesday.

The ex-spokesperson for the PDP said, “The EFCC seized my accounts yesterday night and I can’t get money to feed my family.

“I am in total shock as I am here talking to you. I don’t even know what to say. They seized all my accounts in every bank in this country. As I am, I don’t have money to buy Panadol or water to drink.”

The ex-spokesperson noted that the freezing of his accounts had to do with his ongoing trial on the charges bordering on the N400m he allegedly received from the Office of the National Security Adviser in 2014.

He, however, wondered why the EFCC having earlier seized his assets with the Asset and Resource Management Company Limited and his funds in other banks took the fresh step which he said had denied him access to his funds worth more than the amount at stake in the ongoing trial.

He said, “They have alleged in this case that N400m was stolen. Why would they not limit it to that amount? I don’t know how I am going to feed my family? I don’t have access to any money at all. I am ready to end this case and submit myself to the judgment of this court.”

His lawyer, Dr. Onyechi Ikpeazu (SAN), said he had no objection to what his client was saying except the part where he spoke about ending the case.

But the judge, Justice Abang said the issue was not part of the case before him.

He advised the defendant to ask his lawyer to discuss the issue with the prosecuting counsel, Mr. Sylvanus Tahir, who was present in court.

The EFCC is prosecuting Metuh and his Destra Investments Limited, on seven counts of money laundering and fraudulent receipt of N400m from the Office of the NSA on November 22, 2014, for the PDP’s campaign activities.