Cristiano Ronaldo appears set to keep the transfer rumour mill ticking over at Juventus, with the Portuguese superstar posting a cryptic message on social media as the 2020-21 campaign comes to a close.

The Portuguese superstar has spent three seasons in Turin and is now approaching the final 12 months of his current contract and has been linked with a move to Manchester United, Real Madrid and Paris Saint-Germain in recent weeks.

Ronaldo, 36, finished as the top goalscorer in Serie A this season as Juventus snuck into the top four on the final day of the season. But, Ronaldo was left out for the final game of the season by Juve boss Andrea Pirlo and that led to reports about his future in Turin, once again.

Ronaldo has won two Serie A titles, the Coppa Italia and two Italian Super Cups but Juve failed to win the league this season for the first time since 2011. 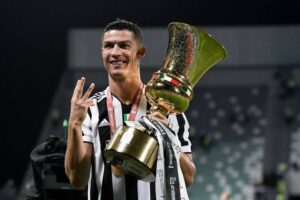 He said: “I have to value everything we achieved this season at Juventus, both in collective and individual terms.”

During his three years in Italy, Ronaldo has also been named Serie A footballer of the year twice, and was the competition’s top scorer in the season just completed.
This season he scored his 100th goal for Juventus, having also passed the milestone at Real Madrid, where he scored 450 times, and United, where he got 118 goals.

He also passed 760 career goals, giving him a disputed claim to being the highest scorer of all time.

Juventus secured a Champions League spot on Sunday, having seen their run of nine straight Serie A titles ended, with Inter Milan winning the league.