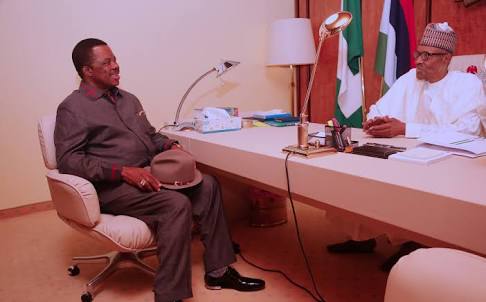 The Anambra State Governor, Willie Obiano, has decried reports that he was supporting the 2019 presidential bids of President Muhammadu Buhari of the All Progressives Congress and Atiku Abubakar of the Peoples Democratic Party.

The governor described stories in the media that he was either supporting the PDP or the APC in the race as “wishful thinking.”

Obiano in a statement on Sunday by his Commissioner for Information and Public Enlightenment, C-Don Adinuba, said he was rather supporting the ambition of the presidential candidate of APGA, Gen. John Gbor, for 2019.

The statement said it was incumbent upon Obiano as the Chairman of the Board of Trustees of APGA to support the presidential bid of his party’s candidate in the 2019 polls.

The statement read in part,”As the 2019 general election approaches, it is interesting how various politicians and political parties have been swooping on Governor Willie Obiano of Anambra State in the belief that his role will be critical in deciding who wins the presidential vote.

“For instance, operatives of two of the leading political parties in Nigeria, the All Progressives Congress and the Peoples Democratic Party, have taken to the media to create the impression that the governor had endorsed their candidates in the forthcoming election.

“Some have even gone as far as reproducing a video of an event which took place in 2014 in a bid to give the impression that the event had just occurred.

“Governor Obiano is the Chairman of the Board of Trustees of the All Progressive Grand Alliance. He is also the APGA National Leader. These positions place heavy responsibilities on his shoulders. Therefore, any talk about him endorsing the presidential candidate of another party, let alone joining another party, is wishful thinking.”

The statement said APGA presidential candidate, Gbor had impressive qualifications including a doctorate and would formally inaugurate his presidential campaign on December 6 in Awka, the Anambra State capital.

It said in addition, APGA had remained the only development-oriented party in the country that cut across religious and tribal divides, noting that Gbor’s vision would make Nigeria a role model to developing countries across the globe.