The Catholic Diocese of Enugu has suspended Ejike Mbaka from church activities for one month, NT can report, as the controversial priest’s political escapades continue to overshadow his theological obligations on a scale that nurtures unending concerns amongst his senior clerics. 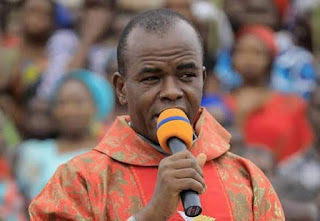 Mbaka was asked to proceed on suspension with effect from May 3 after being summoned by Callistus Valentine Onaga, the diocesan bishop. Mr Onaga called Mr Mbaka in following his repeated clashes with President Muhammadu Buhari and warned that his conduct was smearing the image of the church, the largest of any Christian organisation worldwide, church officials familiar with the matter told NT.

Ejike Mbaka sparred with Mr Buhari’s aides in a series of verbal fireworks that included the Nigerian presidency threatening to blackmail the priest as a political jobber and public contract racketeer. Mr Mbaka denied the allegations.

Still, Mr Onaga and other senior reverend fathers of the Enugu Diocese were compelled to step in and mitigate the unfolding public perception tumult that could have far-reaching consequences for the conventional but unofficial church and state relationship.

The church leaders recognised that Mr Mbaka’s Adoration Ministry as an independent congregation that does not fall directly under the main church’s control, he could still be reined in as a priest under the Roman Catholic’s certification, officials said.

Following his suspension, Mr Mbaka returned to his ministry that lies north of the outskirts of Enugu city centre, where he subsequently incited his members against the bishop, sources said.

Church sources said Mr Mbaka’s latest suspension was being viewed as significant for its undertone, but not the first time the fiery priest would face administrative action.

“We know people will link this to his confrontation with Buhari, but he was once demoted from a parish priest to a deputy under a parish priest,” a church official said. “He had also been transferred from bigger parishes to smaller ones for his frequent infractions in the past.”

Confirming the story, Ejike Mbaka, spiritual director of Adoration Ministry Enugu, Nigeria (AMEN), says the leadership of the Catholic diocese in his state wanted to close his ministry for one month.

Mbaka disclosed this when he addressed worshippers at the adoration ground in Enugu on Wednesday.

The priest had resurfaced hours after some residents in Enugu protested over his whereabouts amid reports that he was missing.

While addressing the worshippers, Mbaka said the church leadership, led by Calistus Onaga, summoned him over his recent comments concerning Nnamdi Kanu, leader of the proscribed Indigenous People of Biafra (IPOB), and his connection to the presidency.

Following Mbaka’s comments asking President Muhammadu Buhari to resign because “God is angry with him”, Garba Shehu, presidential spokesman, had accused the priest of soliciting contracts from the federal government.

However, in response, Mbaka had said Buhari didn’t reward him or his ministry, despite supporting his presidency.

In a recent sermon, Mbaka had also said God will bless Kanu for his courage, because the rising insecurity in the country is “mind-blowing”.

“Wherever he is, may God bless him; because if someone has risen up to shout that his brothers are suffering, is it a crime?” Mbaka had said.

Speaking on his meeting with the Catholic bishop in Enugu, Mbaka said the church leadership told him he would remain indoors for a period of one month to enable him pray and meditate over his activities.

The catholic priest said he asked for an opportunity to address his parishioners but was not allowed.

“How can they believe what others say, and they will not believe what the priest is saying? The emphasis is ‘please, let me go to celebrate the mass’, but they said ‘no’. If a priest will request to celebrate mass and they say ‘no’, that means something is wrong,” he said.

He then added in Igbo that the church wanted him to leave his ministry for one month, but he refused, adding that he was released because of the protest.