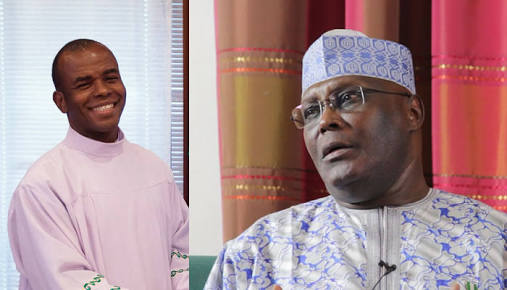 He said APC may lose 2019 election if Buhari doesn’t change his ways.
“So let the will of God be done in Nigeria. It is like what I have been saying; Buhari change or you will be changed.”

Mbaka, who had in his new year eve message of 2015, predicted Buhari’s electoral victory over then President Goodluck Jonathan; said the President had all the human and material resources at his disposal to make the country better but rather chose to play ethnic, despotic politics by surrounding himself with people without vision and not inclined to his line of thought.

He noted that President Buhari has wasted a golden opportunity offered him by God and by implication has disobeyed God.

“What will it take you; change the Chief of Staff, change B, change C, change this and change that; even if it will take 20 Igbo men or 20 Yoruba men to change Nigeria; take all of them. Look at what (Chukwuma) Soludo did in the Central Bank; he has assured Nigeria and the whole world that there is nothing like bank collapse again.

“An Igbo man did this, why can’t Buhari take Soludo for the economic revival and revamping of Nigeria’s economy? And you are busy talking about corruption, playing game with the lives of Nigerians from the issue of Fulani herdsmen to Boko Haram to Jos killings. You said somebody stole, what did he steal?

“Someday, they said the government has spent trillions of naira on social investment scheme and I want to know who are the people they were spending the money on; the Vice President said they are giving N10,000 to small scale businesses and I asked, is this how they will transform Nigeria? You give somebody N10,000 for business, what type of business will N10,000 start?” he queried.

Mbaka advised Nigerian politicians to seek God’s wisdom in their dealings, stressing that they struggled for power at all cost because they lack wisdom.

“Somebody will have billions and want to take the one belonging to the public while hunger will be killing his people. Look at the type of money they shared during the primaries to the extent that they brought Bureau de Change. They said Buhari is change, but Atiku is bureau de change. They were sharing the money in dollars and it was going out in millions of dollars in Nigeria where hunger is killing people; where you don’t have food to eat.

“If they spend such monies to get ticket, how do you think that when they get into power they will rule, of course, they will first recover the money they have spent but the worst is that the money was not being shared to the poor,” he lamented.

Mbaka described the cost of the APC Expression of Interest and Nomination forms as outrageous; saying that if the leadership of the party had conscience, they would not have collected N24 million from people to obtain the forms. He added that a party with conscience would have returned the money to the aspirants instead of casting aspersions on them.

There are some people that sold their land to pay for this form because of the promise they were made. I don’t think these politicians were thinking of heaven that is why they are ready to kill anybody that stands on their way,” he said.

Still, the vocal priest raised fears that Atiku may not be able to solve the problems of Nigeria if he emerged victorious, as according to him, the problems of the nation were so enormous and challenging.

He predicted defeat for the ruling party in the elections but said that there was still opportunity for change.

The price of disobedience is disgrace,” he declared.

He, however, stated that if Atiku had the opportunity that President Buhari has, he would have revamped Nigeria.
Warning: count(): Parameter must be an array or an object that implements Countable in /home/headlin1/public_html/wp-content/plugins/ultimate-author-box/inc/frontend/uap-shortcode.php on line 94
style=”display:none;”>