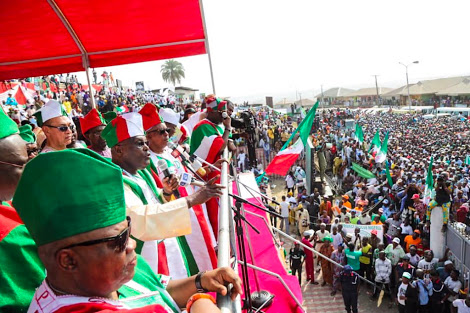 The presidential candidate of the Peoples Democratic Party, Alhaji Atiku Abubakar, on Thursday compared the PDP governments with the present All Progressives Congress administration, saying Nigerians had the longest and consistent record of prosperity and peace under the PDP administration.

Atiku, who made the assertion at the Mapo hall, Ibadan at the South-West presidential rally of the PDP, also promised to begin the restructuring of the country within six months of assumption of office.

Buhari plunged Nigeria into huge debts
He also berated the APC government for allegedly plunging the country into huge debts, saying Nigerians must vote President Muhammadu Buhari out of office in 2019.

Atiku, who was accompanied to the rally by his running mate, Peter Obi; the party’s National Chairman, Prince Uche Secondus; the Director-General of his campaign, Otunba Gbenga Daniel; former governors of Ekiti and Osun, Ayo Fayose and Prince Olagunsoye Oyinlola respectively, lamented the widespread hunger, poverty and insecurity in the land.

He assured Nigerians that he would assemble the best economic team to return prosperity to Nigeria.

The presidential candidate urged Nigerians not to believe the alleged lies of the APC and to use their permanent voter cards to send the ruling party away.

According to him, Nigerians must refrain from selling their votes to the APC for them to witness a rebirth of new Nigeria with food in abundance, quality life, security of lives and property and economic well-being for all.

“Then in 2015, some liars deceived you people, they came to deceive us and we believed in them, we gave them the opportunity. They said they were going to create jobs; instead of creating jobs, we have lost about 12 million jobs since they came to power.

“They said they were going to enhance prosperity; since they came, we have got poorer to the extent that today we have surpassed any country in the world in terms of poverty. We are the headquarters of poverty in the world. Is that the kind of government you want to continue with?”

He added, “My brothers and sisters, I stand before you today to promise you that we shall return your prosperity and the prosperity of this country. If you give me the opportunity again, I will assemble the best team so that we can return prosperity to our country.”

The former vice-president said the South-West was known for its educational strides even before independence, and promised to continue to invest in education to make sure the zone excels.

Saraki, in his address, stated that Nigerians could only end the suffering in the country by voting out the APC

Fayose urged Nigerians to protect their votes during the elections in 2019.

He said, “The only product we are selling is Atiku; PDP and Atiku. That is the product; the product that will come forward and participate in the debate because I can tell you authoritatively that Buhari will not come.

“Therefore, we must stand together because this election is won already. We are only to protect our votes and stand up for the PDP. It will happen and the PDP will be announced again.”

Fayose claimed that the PDP and Atiku had already won the election, telling Nigerians that Buhari would boycott debates because of the fear of Atiku. 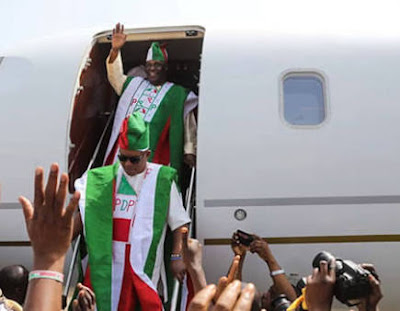 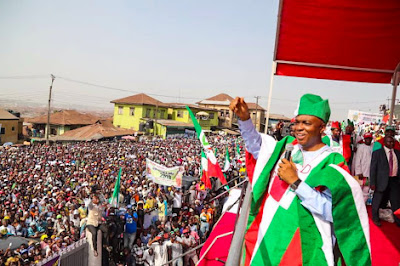 Daniel noted that the presidential election would be a family exercise because Atiku’s first wife was from the South-West and that the candidate started his career and lived in Ibadan as a young man.

Secondus urged the South-West people to vote for Atiku, assuring them that the PDP would return the glory of Nigeria where living would be better as the candidate had the blueprint to rescue Nigeria from its multifaceted problems.

The governorship candidates of the party that attended the rally were Mr Seyi Makinde (Oyo); Mr Jimmy Agbaje (Lagos); and the duo of Oladipupo Adebutu and Buruji Kashamu, who were fighting over the Ogun State PDP governorship ticket.