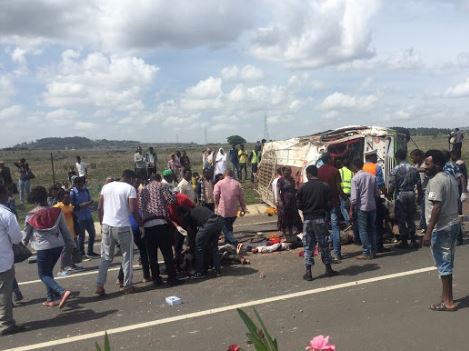 This is tragic. Four staff members of INEC, a youth corps member and a three-year-old girl died in an accident on Ajaokuta-Lokoja road on Saturday, an official has confirmed.

The NYSC member was performing his primary assignment with INEC office in Lokoja, and the child belonged to one of the INEC staff members.

The victims were returning in the evening from

Ayingba area of the state where they attended the wedding ceremony of another INEC worker. The Director of Voter Education and Publicity at Kogi Office of INEC, Mr. Ahmed Biambo, confirmed the incident in a telephone interview with NAN.

Biambo said that the victims were from the Information and Communication Technology and Accounts departments of INEC.

He said that the corpses have been deposited at the morgue of the Federal Medical Centre, Lokoja.

Meanwhile the Kogi Sector Commander of Federal Road Safety Corps, Mr. Olusegun Martins, could not comment on the incident as he did not respond to calls made to his telephone number.