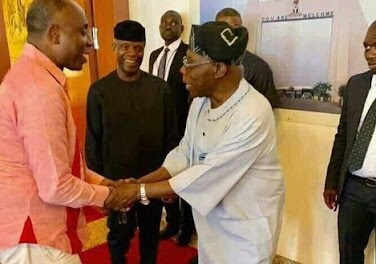 Former President Olusegun Obasanjo has asked the African Independent Television (AIT) to retract with apology, the airing of a photo on its social media segment, Kakaki Social, where a purported tweeter account belonging to him, depicted a picture of his alleged meeting with Vice President Yemi Osinbajo (SAN).

Obasanjo said the apology should also be extended to Osinbajo for the embarrassment the depiction of the picture might have caused him.

The elder statesman stated this in a statement issued by his Special Assistant (Media) Kehinde Akinyemi yesterday.

He expressed disappointment that AIT could disseminate information it sourced from fake Twitter Account without first verifying it.

Obasanjo added that he did not have Twitter account anywhere and expressed concern over the continuous use of his name by suspected fraudsters on social media platforms.

Obasanjo warned that whoever that is caught perpetrating the act, would be made to face prosecution immediately, even as he advised the media to always be professional in discharging their duty and refrain from creating unnecessary confusion and heating up the polity

“It is a fact that severally, the former President dissociated himself from owning any social media account. Therefore, it is highly disappointing that such sensitive Twitter post would be allowed to go on air without verification by the African Independent Television (AIT).

“There was no meeting with the Vice President anywhere. I was at the airport and was informed that he was around in the Lounge and out of courtesy, I felt I should go and greet him. We met, greeted and exchanged pleasantries and I left. That was all.

“The station should have been very professional and not causing confusion and heating up the polity. That I am not operating any social media account should not be strange to a station like AIT, and for that embarrassment, the Vice President and I deserve an apology,” Obasanjo said.