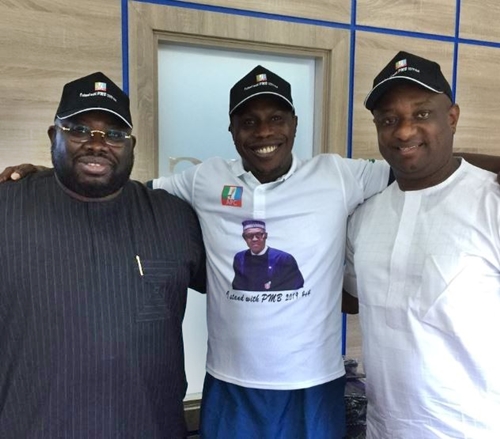 Olujonwo, who is one of ex-President Olusegun Obasanjo’s sons, has opened up about his father as well as why he chose to campaign for President Buhari ahead of 2019 election.

He is aware that his father has endorsed PDP’s candidate, Atiku Abubakar. What is making him go against Obasanjo openly?

Here are excerpts from The Punch’s chat with him:

How close are you to your father?
He is my best friend; my truest confidant. I am his private handbag and I love and respect him very much.

Your father is influential both within and outside the country and means different things to different people depending on their political affiliations. How do you and other family members view him?
To us, he is just dad, not different from any other great dad.

How will you describe former President Olusegun Obasanjo as a father?
My father is a kind and affectionate father. He is a devoted father and a sweet and gentle grandfather. He is a great man to have on your side.

Sharing him with the world has not been easy. But it is the way he is built. It is the destiny that was thrust upon him by nature itself. He has worked as hard as any man in his situation to give as much of his time and moments to us his children.

To be honest, the last few years have been the best that we have had. Less public limelight has allowed more of a private relationship with us his children. I cherish these moments.

You recently declared support for President Muhammadu Buhari’s second term bid in contrast to your father’s choice of Abubakar Atiku for President in 2019. What is your reason for your decision and did you carry your father along?
I joined the APC long before the PDP was reconstituted and before Alhaji Atiku emerged as its standard bearer. So, there is no relationship between my APC membership and my father’s forgiveness of his former vice president.

I am a proud member of the APC because I am progressive by instinct and ideology and because I believe in the progressive instincts of those who lead our party. I believe that our nation is better served by a politics that is progressive, that is one that works for the progress of all citizens and not merely for the interests of a few in power.

President Buhari, like my father, is a man of great conviction. He loves his country and he is committed to reshaping it for the future. He is a man of great humour too, by the way. He is a man l truly value and l have highest regard for him because he is a strong man of high and uncommon integrity, doesn’t betray and very reliable. He is very passionate and sincere about providing for the general good of all for long term benefits.

I just happen to believe in the capacity and will of President Buhari, Vice President (Yemi) Osinbajo and the leaders of our party to reposition and transform our country for concrete greatness which will lead to enduring and lasting legacy of a great and better life for everyone in the future. It is no more than that.

Would you have wished your father is anything else but a soldier?
Absolutely not! I am very proud of my father’s walks. I love the Army. It is the one constant source of pride to our nation. It has been our one constant bulwark against great insecurity and disintegration. It is the Army that continues to bear the brunt of the war against terror and militancy. When you and I are lying asleep at night or going about our business in the daytime, it is our Army that keeps Boko Haram and other forces of disintegration from disturbing our peace and security. I have the highest regard for our forces both the military and the Police Force and their incredible accomplishments with limited resources. I am grateful that my father got the chance to serve that great institution to the highest level.

What do you think he wants to be remembered for?
My father does not indulge in such things. He is too busy getting the day’s job done to worry about how he will be remembered. History will do its own bidding.