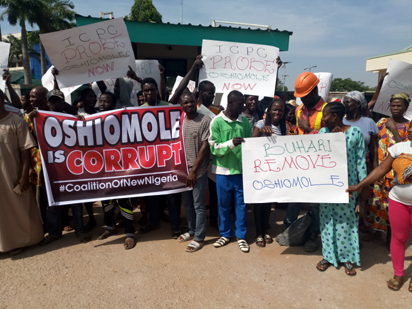 The embattled national chairman of the ruling APC, Comrade Adams Oshiomhole, is in for more trouble as some protesters have demanded he be probed.

Tens of protesters on Wednesday, stormed the headquarters of the Independent Corrupt Practices and other related offences Commission (ICPC) in Abuja demanding an investigation into allegations of bribery levelled against Oshiomhole during the recently concluded nationwide primary elections of the party.

The protesters who were led by Barr. Stanley Onu under the auspices of Coalition for a New Nigeria (CNN) said the protest was in their “quest to arrest the dangers faced by our party, the governing All Progressives Congress, APC, occasioned by the integrity challenged National Chairman, Mr. Adams Oshiomhole”.

The protesters who carried placards with several inscriptions such as ‘Oshiomhole must go’, ‘Probe Oshiomhole now’, among others, said the APC is in serious crisis following the most reprehensible, divisive and widely condemned primaries across the states”.

Speaking further, the leader of the protesters said; “Today, the APC which was gaining grounds and welcoming new members is far from the all-embracing party it was when Mr. Oshiomhole took over as National Chairman.

“Given the various allegations of corruption by respected chieftains and members of the APC, we are here calling on the various anti-corruption agencies to begin a comprehensive probe of not only these allegations, but his time the governor of Edo state.

“For the avoidance of doubt, we are well aware that Justice Anwuli Chikere of the Federal High Court ordered the Economic and Financial Crimes Commission EFCC to commence criminal proceedings against Mr. Oshiomhole for allegedly diverting state funds into personal use.

“Therefore, it is expedient that a man that has corruption noose round his neck is not the fit and proper person to lead a party that has President Muhammadu Buhari, a man known globally for his anti-corruption stance, to remain in office.

“We demand that Mr. Oshiomhole resigns owing to the plethora of allegations against him leading to even the DSS inviting him and demanding for his resignation.

“In the event Mr. Oshiomhole chooses to tread the path of the little honour left of him, we urge President Buhari to ask him to leave before he leads the APC down the path of ignominy in 2019.

“We assure you that this will not be the end of the Coalition for New Nigeria’s protest until Mr. Oshiomhole leaves the exalted office of the National Chairman of the governing APC, the party of Change”.

Addressing the protesters, spokeswoman of the commission, Rasheedat Okoduwa buttressed the impartiality of the ICPC, saying it would look into all petitions before it, giving precedence to the time of filing, Vanguard reports.

She urged the protesters to remain peaceful and allow the petition go through the various stages as put in place by the commission.