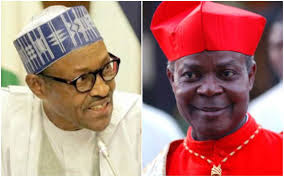 A former President of the Christian Association of Nigeria, Anthony Cardinal Olubunmi Okogie, has told President Muhammadu Buhari that religious leaders in the country will continue to intervene in political issues in the interest of the nation.

Okogie, a former Catholic Archbishop of Lagos, stated that

part of the responsibilities of clerics in the society was to reconcile warring politicians and criticise them when they err.

The retired Archbishop, who expressed his position in a statement sent out on Monday, titled, ‘On the President’s recent admonition,’ was reacting to the comments made by Buhari at the Interfaith Initiative For Peace Conference held in Abuja on October 13, where the President advised religious leaders in the country to eschew partisan politics ahead of the 2019 general elections.

Buhari had said, “Having witnessed the roles our religious leaders have been playing so far, I appeal to them to eschew partisan politics. I also appeal to their respective members to read the manifestos of each political party, discuss and pray for God’s guidance before casting their votes.

“Religious leaders should not be seen to involve themselves in partisan politics or political controversies. Otherwise, they risk losing their status and public respect.”

But Okogie said, “Mr President, we are in danger in Nigeria today because politics is separated from morality. Instead of working for the common good, our politicians, with very few exceptions, are working for their selfish interests. Their primary objective is how to get into power and how to remain in power. This kind of politics is a breach of security and an impediment to development. When politicians divorce politics from morality, it would be irresponsible on the part of religious and traditional leaders who ought to be custodians of values to leave politicians to set this country ablaze.

“Nigeria that was once set ablaze by a quarrel between two politicians, a quarrel that led Nigeria into a bloody civil war, religious leaders who are able to broker peace have the responsibility to at least ensure that they reconcile. Some of us, despite being threatened and maligned by some media aides, will continue to engage politicians to ensure that they do not take Nigeria back to 1966-70. That is why some of us speak.”