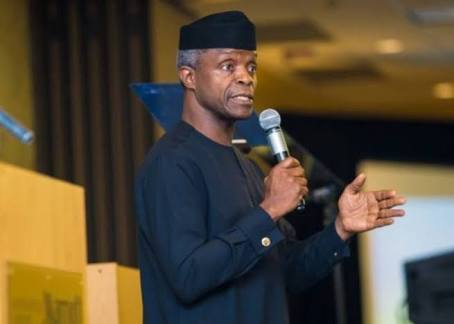 Vice president Yemi Osinbajo has vowed that the Peoples Democratic Party (PDP) will not be allowed to return to power again.
Osinbajo said this on Saturday in Lagos while speaking at the inauguration of the All Progressives Congress (APC) Door-To-Door-Campaign flag off of the Professor Yemi Osinbajo (PYO) Support Group.

He said his principal, Muhammadu Buhari, who seeks a

second term in office will not loot the resources of the country, as this is the different between the president and other presidential candidates.

“After 16 years of ensuring that the country did not make progress, they want to come back. They will never come back again. We are making progress and we will continue to make progress. We are going to the next level,” Osinbajo said referring to the PDP which governed the country since the return to democracy in 1999.

The opposition party’s bid to hold sway for 60 years was thwarted by the APC who won the 2015 presidential election.

“Our major problem in Nigeria is corruption; it’s not plans. There are so many plans. If you allow the resources of the country to be stolen, no plan can work. The difference between Muhammadu Buhari and any other president is that he will not steal and he will not allow stealing,” the vice president continued.

“The most important thing of all is that we will prevent a situation where people who have stolen our money in the past come back into government. If they do, there won’t be progress no matter what they say.

“The money of this country must be preserved so that it will benefit us all. Education, healthcare, jobs, if you don’t have money, you can’t do them.

“There are only two types of leaders in Nigeria, those who want to steal the money and those want to use the money for the common good.