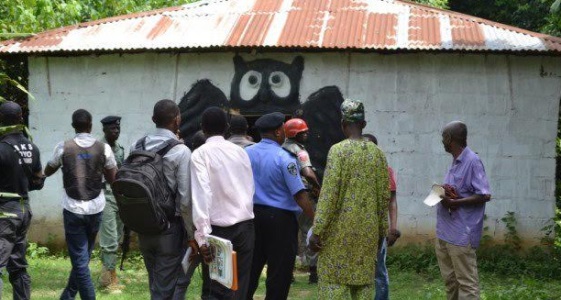 The police in Lagos have uncovered a shrine which suspected fraudsters used to defraud innocent people under the false pretence of making the victims rich.

Police operatives uncovered the shrine at Imota area of Ikorodu, Lagos, where four treasure boxes containing some charms were recovered.

Two of the operators, Adekunle Adeniyi, 50 and Faleke Fijabi, 52, have been arrested and detained by the police in connection with the alleged fraud.

This was disclosed by the Lagos State Commissioner of Police, Imohimi Edgal, at the State Command. The suspects were also paraded with other suspected criminals by the police.

The police boss said that on 23rd October, 2018, the police received information that some group of persons were sighted going from one compound to another at Imota area of Ikorodu, promising unsuspecting members of the public that they had the capacity to double money.

He said based on the information, the operatives of the F-SARS were mobilised to the scene. When the suspects sighted the police, they escaped to avoid arrest. However, two of the gang members, Adeniyi and Fijabi were arrested.

Edgal said that the suspects confessed and took the operatives to their shrine where the exhibits were recovered, according to PM Express.

During investigation, it was revealed that the suspects had successfully defrauded one Sunday Adeleke of the sum of N700,000 by false pretence.

CP Edgal said that so far the police have recovered the sum of N300,000 as exhibit while investigation was going on, with a view to apprehending the suspects at large for prosecution.