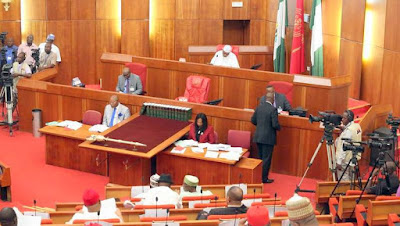 The Senate on Thursday directed the police to vacate the premises of the Akwa Ibom State House of Assembly as well as cease denying legislators access to their chambers.

The issue of closure of the State House of Assembly came up for discussion on the floor of the Senate again, when Senator Bassey Akpan revealed that state lawmakers were still unable to access their chambers.

He said, “Security agents are still there. No legislator has been allowed in or out. We owe the people of Akwa Ibom this responsibility. It is not right. An injury to Akwa Ibom State is an injury to Nigeria.”

Contributing to the issue, Senator Ahmad Kaita said, “If the police vacate the premises, the legislators will go in there with their supporters and create fracas. The police are only there to promote peace. Let us, as a Senate, verify the facts of this issue before taking any action.”

At the end of the debate, which saw Senators Bukola Saraki, Ike Ekweremadu, Bala Na’allah, Sam Anyanwu and others contributing, the Senate resolved to “ask that the police vacate the premises and not prevent the legislators to have access to the chambers.”