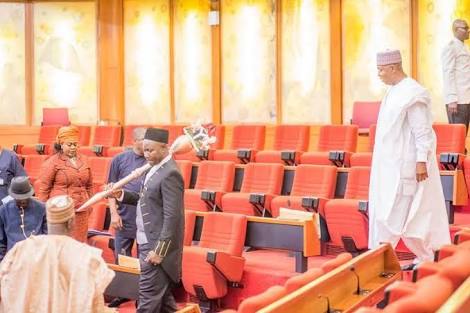 Many senators who have been cleared by the Independent National Electoral Commission to contest the 2019 general elections stayed away from plenary on Tuesday, forcing the red chamber to adjourn till next week.

The chamber needs at least 37 senators to carry out legislative activities at plenary but it was observed that only 20 senators out of 109 were seated at the commencement of the session yesterday.

The Minority Whip, Senator Phillip Aduda, who moved the motion for the adjournment, citing order 10 (3) of the senate rules, explained that most of the members were not at plenary because they went on oversight functions.

He said, “We are less than the number required to form a quorum. Mr. President, I want to move that since we have not formed a quorum, we may therefore adjourn.

“In doing so, I want to say that the senate is empty because various committees are carrying out oversight duties, they are all over the country, ensuring that the budget is performing.

“On that note, the senate may wish to extend the period of oversight functions if it so wish, by another week, till November 20.”

The Deputy Senate President, Ike Ekweremadu, seconded the motion for the adjournment, stressing that the order cited by Aduda bars the senate from carrying out any legislative duties if members are not up to 37.

Ekweremadu said, “I rise to second the motion ably moved by Senator Aduda but let me add that we are more than 10 but certainly not up to 38. We are somewhere between 15 and 20. Just for the record we are not less than 10 but less than 20.”

The President of the Senate, Bukola Saraki, put the motion to vote and members overwhelmingly backed it.

Senate Leader, Ahmad Lawan, thereafter moved for the adjournment till November 20 and the motion was seconded by the Deputy Minority Leader, Senator Emmanuel Bwacha.

Investigations, however, showed that many of the senators might have stayed away to enable them to carry out necessary preparations for their campaigns starting on Sunday.

A former senate leader, Ali Ndume, told journalists in his office that the adjournment of plenary would continue till the end of the elections, because his colleagues would be busy with electioneering.

He also explained that most of the senators decided to stay away in order to face their campaigns, because deliberations at plenary in recent times usually centre on private issues.

He said, “I would have stayed back in my constituency too if I had known that many of our colleagues would not turn up for today’s proceedings. We are already in the election period.”