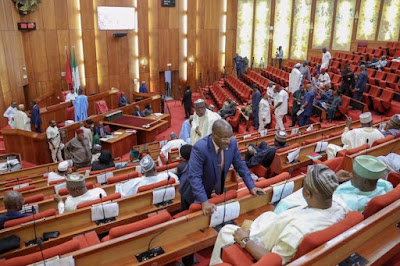 The recent oversight exercise embarked upon by the various committees of the Senate has set tongue wagging among members of the various panels of the red chamber.

The senators adjourned plenary early this month to

embark on oversight functions aimed at ascertaining the performances of the ministries, departments and agencies of government, especially their implementations of the 2018 budget approved for them by the parliament.

Legislative oversight is an institutionalised mechanism aimed at checkmating the alleged excesses of the MDAs by curbing waste in governance, corruption and absolutism in the exercise of political powers.

Early this year, some heads of federal MDAs accused lawmakers of demanding bribes as conditions for passing the 2018 budgets

The officials alleged that the increasing bribe demands was responsible for the reluctance of a number of heads of MDAs to honour invitations by Senate and House of Representatives committees to defend their budgets.

Investigations by the correspondent at the red chamber revealed that some chairmen of committees are at loggerheads with their members over alleged benefits from the just-concluded oversight exercise.

A lawmaker from the South-West, who is a member of a ‘juicy’ senate committee that visited many parts of the country on oversight functions in the last three weeks, said many committee chairmen are greedy.

The senator, who spoke with The Punch on condition of anonymity, said the chairmen, in active connivance with their clerks, had been short-changing members of their committees.

He said, “There is no transparency in the activities of many committee chairmen. They don’t carry their members along in most of the issues, especially those bordering on money and other benefits from government agencies that we are supervising.”

Although other senators confronted with allegations denied the existence of such practice, a clerk to one of the committees in the senate, who spoke on condition of anonymity describe the issue as “an open secret.”

Such scenario even played out last Thursday when the Vice-Chairman, Senate Committee on Army, Senator Ibrahim Danbaba, raised a point of order during plenary, alleging that his chairman, Senator George Akume, was not carrying him and others along in the activities of the committee.

Danbaba urged the senate to disband the committee because Akume had allegedly refused to call meetings despite the fact there were lots of assignments before the panel.

The senator later addressed journalists where he further alleged that attempts by him to convey meetings were frustrated by the clerk who according to him, take orders from Akume.

A member of the committee also told The Punch on condition of anonymity that the 2018 budget of the Army was allegedly increased by N80bn.

The source said, “The budget of the Army was increased by N80bn this year. This is similar to what they did to the 2017 budgetary allocation and none of us was aware.”

Attempts to speak with Akume as of the time of filing this report was not successful as calls to his mobile phone did not connect while a text message sent to him did not deliver.

Confronted with allegations of senators demanding gratifications from MDAs and fighting among themselves over the sharing formular, spokesman for the Senate, Ben Murray-Bruce, challenged any head of the federal government agency to come up with such proof.

He said, “I wonder why the MDAs are saying that we are promoting corruption through our oversight functions. They should publish the name of the senator or the names of the group of senators demanding money from them.”

He also said any lawmaker that has proofs that his or her colleague collected money from any MDAs should come out with evidence and make them public.

The Chief Whip, Senator Sola Adeyeye, said, “Fortunately, I have never been chairman of a committee (in the 8th Senate). All I know is that I have never demanded a bribe from anybody.

“I also know that (former) Senate Presidents David Mark and (current) Bukola Saraki had repeated warned members not to demand bribes whenever they go on oversight functions, particularly because they said it makes the National Assembly prone to all these allegations.

“Whether people do it or not, people who demand bribes will not do it openly and that is the truth. Fortunately, until 2015 I was in the opposition and I was chairman of the Education committee for a very short period, after the death of Senator Chukwumerije. There is no agency in this country that can say that I have ever demanded a bribe from them.”

“How can I say it is true when I am not involved? I wouldn’t know actually. I chaired a committee in the 7th Senate and Akinwunmi Adesina, the current President of the African Development Bank worked with me, maybe he can testify to it. If others do it, I am not aware of it,” he said.

In his denial, Chairman of the Senate Committee on Science and Technology, Senator Ajayi Boroffice, stated that his committee always funds its oversight trips. He however said gifts are accepted based on the discretion of the host.

He said, “That (allegation) is not true. When we go on oversight visits, we buy our tickets, we book our accommodation. If for some reasons the MDAs want to be of assistance, then it will be on agreement between the MDA and the committee.

“I have been going on oversight visits and I have never demanded any bribes or any monies from any MDAs. I have never insisted that they should provide accommodation or tickets. We have an impress account give to us on a monthly basis for oversight functions.”

When contacted, a ranking senator who is also the Chairman, Senator Committee on Power, Steel Development and Metallurgy, Enyinnaya Abaribe, said, “I do not think we should dignify such utter rubbish by responding to it.”

Also the Chairman, Senate Committee on Petroleum Resources (Downstream) said, “Part of the responsibility of the press is to help in building strong institutions by exposing corruption wherever they see or suspect there is one”

He added, “It is a very good development that under this administration some MDAs are coming out to make such revelations, please help the National Assembly and Nigeria by naming the MDAs that made such assertion and the lawmakers that agreed with them!