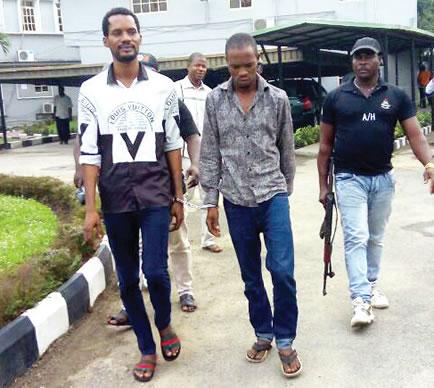 For failure to meet the N5m bail granted him by the Federal High Court in Lagos, Nollywood film-maker, Olajide Kazeem, better known as Seun Egbegbe, has so far spent about 20 months in prison custody.

The Lagos ‘big boy’ has been held in prison since

February 10, 2017, after he was arraigned by the police for alleged serial frauds involving N39,098,100, $90,000 and £12,550.
Egbegbe allegedly fraudulently obtained the money from no fewer than 40 Bureau De Change operators in Lagos over a period of two years – 2015 to 2017.
He was said to have allegedly swindled the BDC operators by falsely representing to them that he had naira to change into foreign currencies and vice versa.

Egbegbe, alongside one Oyekan Ayomide, was first arraigned on February 10, 2017 before Justice Oluremi Oguntoyinbo, on 36 counts bordering on advance fee fraud.

The charge sheet was subsequently amended twice, with the counts eventually increased to 40 and three other defendants – Lawal Kareem, Olalekan Yusuf and Muyideen Shoyombo – added.

The prosecuting counsel for the police, Innocent Anyigor, said Egbegbe and the other defendants acted contrary to Section 8 of the Advance Fee Fraud and Other Related Offences Act 2006 and were liable to be punished under Section 1(3) of the same Act.

They, however, pleaded not guilty.

On February 24, 2017, Justice Oguntoyinbo granted each of them N5m bail with two sureties in like sum.

The judge said one of the sureties must be a civil servant on at least Level 16 and must own a landed property in Lagos State.

The surety, the court said, must deposit the Certificate of Occupancy of the landed property in the custody of the court.

Both sureties were to swear to affidavit of means while their addresses were to be verified by the court registrar.

Justice Oguntoyinbo ordered that the defendants should be remanded in the prison custody until they meet the bail conditions.

About 20 months after the bail was granted, Egbegbe, who was known for lavish spending, has, however, remained in the Ikoyi Prison custody, as he has not been able to meet the bail conditions.

The police prosecutor, Anyigor, had told the court that he had no fewer than 40 witnesses, including the BDC operators, who would testify against Egbegbe and his co-defendants in court.

So far, the prosecution has called four witnesses.

The Punch reports that the trial had been slowed down sometimes due to inability of investigating police officers, who were listed as witnesses, to attend the court.

At other times, the case was stalled because the Hausa BDC operators, who were listed as witnesses, complained of inability to either speak or understand English language and an interpreter had to be arranged.

The case was last heard on November 1, 2018 and it is billed to resume on Monday (today) for continuation of trial.