News
December 10, 20180351
Contrary to claims by the Nigerian Army that 23 soldiers died in the recent attack by Boko Haram insurgents on Nigerian Army 157 Task Force Battalion in Metele, Borno State, one of the soldiers who survived said no fewer than 200 people lost their lives in the incident.

He also said that Boko Haram members, who were earlier arrested by soldiers in the battalion but later released by superior authorities, were among the attackers.

But Defence Headquarters in a reaction, dismissed all the allegations raised by the surviving soldier, insisting that only 23 soldiers were killed in Metele attack.

The soldier, who disclosed these, yesterday, to Vanguard on condition of anonymity, said the video being circulated as depicting the Metele attack was the video of an earlier attack on soldiers in Jeli.

He further noted that the wrong location of the base, faulty Armoured Personnel Carriers, APCs, and absence of aerial support from the Nigerian Air Force made it possible for the insurgents to inflict heavy casualties on the soldiers.

However, the surviving soldier appealed to President Buhari to disregard the information being given to him, saying that apart from the poor equipment deployed to the battlefield, soldiers were being owed six months allowances.

Consequently, he urged the President to review the welfare packages of those fighting the war, alleging they are being underpaid by the authorities.

Also, he regretted that the ground troops were not getting enough support from the Air Force, saying while Boko Haram insurgents monitored their activities with drones, the Air Force hardly carry out such tasks in enemy camps.

Continuing, the soldier, who said the Army does not have an accurate data of those on the war front, added that the Air Force always attribute alleged inability to support them to poor visibility.

Metele attack
His words: “The information about the Metele attack by the head of the Army, especially the Chief of Staff is wrong. I do not think they are doing what they are being paid to do. Soldiers are being killed daily, and their families are not being catered for properly. Last year, a celebration was hosted in Maiduguri to make sure that Internally Displaced Persons, IDPs returned to their respective areas. One hundred and fifty (150) vehicles left Abuja for Maiduguri for the exercise, 15 suddenly got missing and the 15 vehicles that got missing were painted green, with Operation Last Hold written on them. They are the vehicles being used in attacking military locations, including Gagiram that was first attacked.

“The attack led to the death of a Captain and 11 others, but they told the press and others that we lost only seven soldiers. Even if seven soldiers died, was it right to describe the figure as only? I think Nigeria is in a state of war. For us to lose about 11 soldiers and they called it just seven it is not true.

State of war
“Gagiram was attacked the second and third time. Minari was attacked and we lost 13 soldiers and officers. Others, who ran into the bush are still missing. The fight against the insurgents became intense with attacks on many locations. Between Gudunbalo and Gamasa, we lost many soldiers but it was unreported in the press and to the Presidency. No fewer than 200 soldiers were killed and the truth was never told.

“Jeli was also attacked. Many soldiers died and some are still missing. The question I am asking today is: Does the Army headquarters actually know the total strength of soldiers fighting in the North East? I don’t think so.

“Since the Metele attack, many soldiers are still missing. Some corpses have been recovered while many have not been recovered. How do they know the total number of soldiers? I was surprised when the Chief of Army Staff came out on the TV and said only 23 people died. Let’s assume that 23 soldiers died, was that enough to call the number only? It is inhuman. What I know is that when a General loses in a battle, he is supposed to be court-martialed, retired, or jailed.

But, some of our commanders failed and were then promoted. It shows that we are very wicked and we have lost it all as a nation. What about the people that died as a result of his actions?

We are poorly fed
“On our welfare, the Federal Government has released Ratio Cash Allowance, RCA, and operational allowance. It has not been given to us. We are only paid N20,000 monthly, and we are not paid at when due.

They pay N10,000 in cash and N45,000 is being given to the commandant for feeding. What are we being fed? They feed us beans every day in the morning. At noon we are given rice, while we eat garri for supper. People have developed diabetes because of regular intake of carbohydrate. Some soldiers now have challenges with their eyes because of what we eat. We are not properly fed, but they will come out to tell Nigerians that soldiers are well paid.

“The issue is not about deploying more people to the North East. People have stayed in the North East for four years without being rotated. Some have never seen their families, some who had no chance of seeing their families have died. They should forget about sending people to the North East and equip the soldiers properly. I want the President to heed this advice. What we need is not to send people to Sambisa. The President should ask what the army leadership did with money for the procurement of weapons. Did they actually buy new weapons or refurbished weapons?

Army on the defensive
“The APC’s we have cannot run for 10 to 15 minutes without overheating or stopping in the bush. The Anti-Aircraft Artillery, AA, also has the same challenges. We cannot shoot for three minutes without stoppages. But Boko Haram shoots for more than two straight hours without stoppages. Now, the question I am asking is: Is the Army supposed to be on the offensive or defensive? I know that an army is supposed to be on the offensive. There is no need for us to be defensive all the time.

“We lack equipment. Soldiers have overstayed in the battlefield. There is a standing order that soldiers who have spent three months will be allowed to have two weeks to visit their families. What suddenly happened to the standing order?”

Recognition for Col Sakaba
He continued: “Soldiers, who fought and died were never to be promoted. But those who recovered the body of the late Major General Akali in Jos have all been promoted. What about the people who are fighting Boko Haram and those who died fighting Boko Haram? The late Lt. Colonel Sakaba who died in Metele should be promoted. The families of other soldiers who died fighting should be compensated. We are all human beings. We only read about our allowances on the pages of newspapers.

“It was reported that we are entitled to N2,000 daily for feeding, while N5,000 is the operational allowance for 30 days. The Federal Government said the soldiers in the North East are being paid N95,000, it is not true. We are only being given N20,000 as monthly allowance and it is not regularly paid. We want our money paid as at when due and they should pay us all the arrears effective from the day it was released. 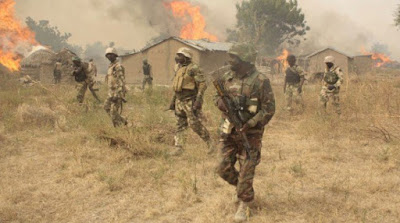 It also denied that over 170 soldiers died in the recent attack carried by the terrorists at Metele Village in Borno State, reaffirming that only 23 soldiers died, with 31 others wounded.

The Director of Defence Information, Brigadier General John Agim, reacting to the allegations while speaking to Vanguard on the telephone, insisted that the military authorities were fully responsible for all the needs of the troops in the North East and asked the general public to disregard the allegations he described as not only baseless but also unfounded.