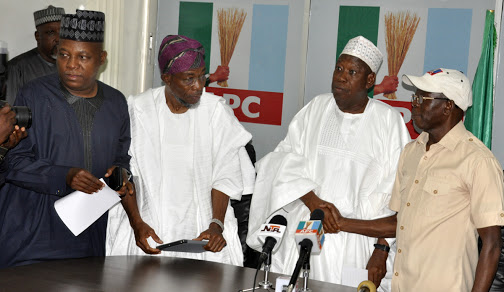 Amidst the controversies and mixed reactions still trailing the allegation levelled against Kano State Governor, his party, the ruling APC, has said it would not substitute his name for the 2019 election.

And this is a party telling Nigerians about integrity?
While speaking in an interview with PRNigeria, the APC National Publicity Secretary, Lanre Issa-Onilu, said despite the allegation against Kano State Governor, Abdullahi Ganduje, of collecting kickbacks from contractors, APC would not substitute his name for the 2019 election.

Issa-Onilu, who was asked whether the embattled governor will eventually be dropped as APC’s Kano gubernatorial candidate in view of published video clips, said Ganduje remains the standard bearer of APC in next year’s governorship election.

He clearly pointed out that the party lacks the power to change or arbitrarily substitute a bonafide candidate, adding that: “The INEC guidelines on the selection or replacement of candidates are explicit. It doesn’t confer power on political parties to whimsically, arbitrarily or recklessly just substitute a candidate on frivolous grounds.

“It is only when a candidate dies, voluntarily withdraws from contesting an election, or a court pronouncement that a candidate can then be substituted or replaced, if you like.

“So as things stand, Governor Abdullahi Umar Ganduje, regardless of the unfortunate development is and still remains APC’s Kano guber candidate. Don’t forget that the governor has sued the publisher of the online media for defamation of character.”