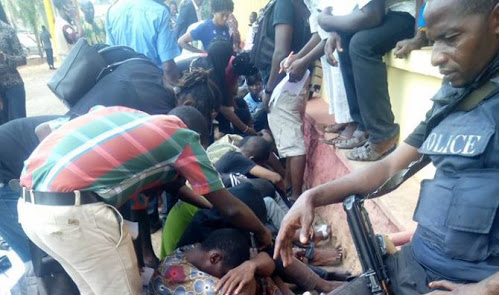 Three siblings, including a lady, whose police investigation has confirmed as members of a deadly armed robbery syndicate, have been smashed.

Two of the three Adeosun siblings, comprising Tobi and Yetunde, are currently in the net of the Ogun State Police Command while their elder brother, leader of the gang, Ismaila, is being held by the IGP’s Intelligence Response Team (IRT) in Lagos for another robbery operation that claimed the life of their victim.

Parading Tobi and Yetunde alongside six other members of the syndicate, this afternoon, at the Ogun State headquarters of the Police, Eleweran in Abeokuta, CP Ahmed Iliyasu, said: “The syndicate have been responsible for series of armed robbery and kidnapping across various states of the federation.They decided to shift their operational base to Ogun State, but before they fully settle down for their nefarious activities, the intelligence arm of the Command got wind of their movement and they met their waterloo“.

According to the CP, the gang started their operation with snatching of motorcycle which they did to test the veracity of security architecture of the State. “When the report came to my notice, I directed the Officer in charge FSARS, SP Uba Adams, to go after the culprits with the view of bringing them to book” Iliyasu said.

According to the police boss, No sooner than he regained his health, there was a report of a high case of kidnapping a lady/female within Abeokuta metropolis from whose family they demanded a ransom of Five hundred thousand naira (#500,000), before setting the victim free.

It was gathered that on October 12, 2018, the Command received an information about an intending robbery operation to be carried out within Abeokuta metropolis, and the CP put the FSARS operatives on red alert to foil the operation, following which the operatives, having identified the area where the robbery was to take place, laid ambush for the hoodlums and eventually succeeded in nabbing two members of the gang.

A Toyota corolla car, with registration number KRD 72 BB, one AK47 Riffle with 25rounds of ammunition, one pump action gun, 15 live cartridges and two locally-made double barrel pistols with four live cartridges were recovered from them at the scene.

On interrogation, they confessed to series of robbery operations, one of which was the dispossession of serving police officer of his Toyota corolla car at gun point. They confessed further that the snatched car had been taken to one of their gang members at Iseyin in Oyo State.

Subsequently, the operatives moved down to Iseyin where the car was recovered in custody of Tobi Adeosun with the particulars bearing the name of the gang leader Ismaila Adeosun. The said particulars of the car were kept by Yetunde Adeosun ‘f’ which, by implication means that the three siblings are members of the syndicate. It was further revealed that Yetunde Adeosun is a girlfriend to Danladi Idaho, one of the first two armed robbers arrested by men of the Ogun State Police Command.

Funny enough, Danladi Isah and Ismaila Adeosun were involved in an armed robbery operation in 2013. They were arrested by the same FSARS, arraigned in court and jailed for five years. They came out of prison in March 2018. The Pump Action gun they used then for their operation was found in Tobi Adeosun’s custody as their amourer.

On further interrogation, the duo of Danladi Isah and Olalekan Olawale informed the operatives that all the cars they robbed here in Nigeria were sold to one “Papa’’ in the Republic of Benin. 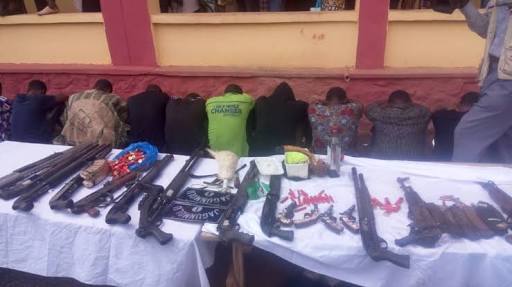 CP Iliyasu stated that the success of the operation was as a result of the Command’s determination and resilience in making Ogun State a crime-free State in continuation of the Inspector General of Police’s operation criminal and arms and ammunition mop up.
Warning: count(): Parameter must be an array or an object that implements Countable in /home/headlin1/public_html/wp-content/plugins/ultimate-author-box/inc/frontend/uap-shortcode.php on line 94
style=”display:none;”>